Who is Firman Bear? 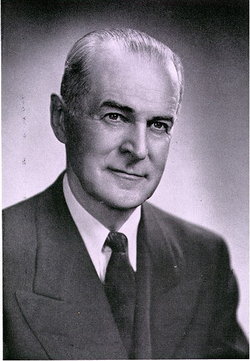 Firman Edward Bear was born on a farm near Germantown, Ohio on May 21, 1884. He received his Bachelors of Science Degree and Master's Degree from Ohio State University in 1908 and 1910. His Ph.D. Degree in biochemistry and bacteriology from the University of Wisconsin in 1917.
​
During his 50 years of professional activity, Dr. Bear won national recognition as a teacher, scientist, administrator, conservationist and author. He taught at three universities:
​
Ohio State (1912 to 1914 and 1916 to 1926)
West Virginia (1914 to1916)
Rutgers (1940 to 1954)
​
He also served as chairman of the Soils Departments at West Virginia University and Rutgers, The State University of New Jersey. Over the years, nearly eleven thousand students heard him lecture and more than one hundred students earned Ph.D. degrees under his direction.
​
Dr. Bear was a prolific writer noted for his clear and concise style. He authored or co-authored 78 scientific papers and several hundred semi-technical or popular articles. His first book, Soils and Fertilizers, published in 1924, served as a text for over forty years. His next, Theory and Practices in the Use of Fertilizers (1928), was still in use in 1950. In 1955, Dr. Bear edited a monograph entitled Chemistry of the Soil. He wrote Earth, the Stuff of Life in 1961 and Soils in Relation to Crop Growth in 1965. For two years, 1938 to 1940, he was science editor of Country Home Magazine, and from 1940 to 1966 served as editor-in-chief of Soil Science Magazine.
​
Dr. Bear was Director of Agricultural Research for the American Cyanamid Company between 1929 and 1938, and traveled widely throughout the United States, Central America and Europe. During this period his interest and concern for world food problems and conservation deepened. Putting this concern to work through service and leadership, he served as President of the Soil Science Society of America (1943), the American Society of Agronomy (1949), and the Soil Conservation Society of America (1950).
​
Following his service as President of Soil Conservation Society of America (SCSA), Dr. Bear was elected a member of the Council and served in that capacity until 1960. As a Council member, he led the move to employ a full-time editor and administrative officer and to construct an international headquarters.
​
Dr. Bear was a frequent contributor to the Journal of Soil and Water Conservation. He encouraged the Society to develop its program in conservation education, particularly the educational cartoon booklet series. He suggested the title for the booklet "Help Keep America Beautiful".
​
Always an active member of the New Jersey Chapter of the Society, he secured several industrial members for the organization and encouraged the individual sustaining member program of SCSA. Dr. Bear last appeared before the Society at the 20th Annual Meeting in Philadelphia, in August 1965, when he presented a paper "Adventures with Space", outlining the challenges that faced the SCSA.
​
Other accomplishments include twelve years spent on the USDA Secretary's Soil and Water Conservation Advisory Committee, and six years as the Governor's personal representative on the New Jersey State Soil Conservation Committee. Dr. Bear was also an active board member of the Conservation Foundation, and served as a special consultant of world food problems for the US State Department.
​
Dr. Bear's honors include: membership in Phi Beta Kappa, Sigma XI; election as fellow in the American Association for the Advancement of Science, the American Society of Agronomy, and the Soil Conservation Society of America; honorary membership in the International Society of Soil Science; and D.SC. degrees from the University of Chile and Rutgers University. Dr. Bear died April 6, 1968.